Let's face it: Buddhism is cool. I admit that. To a lot of people, any religion that involves Jesus is, in the tongue-in-cheek words of Christian Lander, "kind of trashy." (Note: I can't find this quote online anymore where it originally belonged, so I'm assuming he got too much criticism, which is too bad.) Buddhism (the Western adaptation, that is) seems to have all the selling points of Christianity without any of the turnoffs, hence its appeal. Buddhism seems to other people like the opposite of Christianity, hence its rebel mystique. It has some demands, and they appear to be all the demands that certain people want demanded of themselves without the demands they don't.

These perceptions are not far off. Tim Geoffrion, who has spent significant time in Buddhist Southeast Asia, writes,


Like Jesus, the Buddha is usually portrayed as a gentle and wise spiritual guide. By following his teachings and example, in pursuit of enlightenment and liberation from this world, Buddhists seek to detach themselves from all those desires that produce suffering. Along the way, they seek to live peacefully and to become more compassionate toward others. . . .

As Buddhists look to the Buddha for a better way to live and for hope for their lives, so Christians look to Jesus. Yet, Jesus’ way is different.

Read his full post to see why Buddha isn't just a cooler version of Jesus or someone who would have been besties with Jesus but Jesus' followers screwed his teachings up.
No comments:

The Wife of Jesus Thing 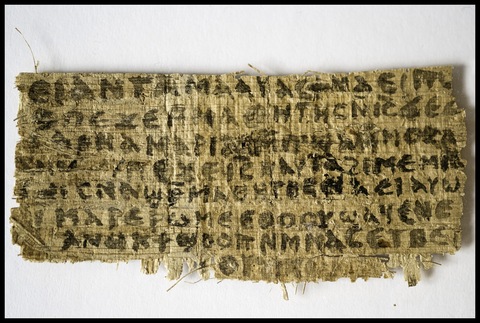 If you're wondering what my opinion is on this scrap of papyrus about Jesus' wife that you may have heard about, I haven't researched it enough (or had enough interest) to formulate one. But Ross Douthat has written an opinion that makes a whole lot of sense to me—and not only about this shocking revelation, but the several we've encountered in recent years—so for now let's call his opinion mine and save ourselves some time. Check it out.
No comments: Jessica Harris has written a terrific piece on "Five Reasons Purity Rings and Pledges Don't Work." It's very valuable not just for parents considering how to raise their kids with respect to sex. It's also for people of all ages to consider what the essence of purity is—more than a choice, more than a physical disposition, and definitely more than a ring.
No comments:

What Men Are For

Now I don’t have hard evidence of this. I haven’t walked into a party where someone began deriding men and everyone eagerly chimed in, so if these circles really do exist, they are pretty detached from the circles I run in. But I see soft evidence of their existence online in articles and more tellingly in comments to those articles. Now I admit that people’s anonymous internet comments don’t count for much, because it seems that many people will say anything if no one knows who they are. But such online salvos seem to lack any awareness that any decent person would counter their scorn unless that person is him- or herself dangerously deranged. This suggests that for such a poster, their offline world is as supportive of their disdain as the online one.

One example of contempt for men that I saw online recently is a New York Times column entitled, “Men, Who Needs Them?” I must point out that the author, biologist Greg Hampikian, didn’t write with attitude or hatred. In a fairly easy-going tone he simply pointed out that if all men died today, we have enough in sperm banks to keep the human race going for a really long time, and he claimed that it would be no problem for women to manage things without men while the kids grow up, even if all the kids are daughters and repeat the process.

His assumption that biology is the only place to find a reason for men’s existence is rather appalling, but I don’t fault him for taking logical steps from lousy first principles. I’m more concerned that he offered the imprimatur of Science to disdain for men that arises from other sources, exemplified by his colleague who, when asked by him if there was anything irreplaceable about men, replied, “They’re entertaining.”

Contempt for men was more obvious in the comments following another Times column. In “Why Men Fail,” David Brooks describes how most men are falling short of most women in a variety of measures of achievement. Brooks then summarizes (without quite endorsing) Hanna Rosin’s recent argument that women are succeeding because, like immigrants, they are adapting rapidly to a rapidly changing world while men are clinging to obsolescent ways.

Now, one might think that the despisers of men would relish a piece like this that says that women are winners and men are losers. Judging by many comments, perhaps scorn is the most natural way for them to express their appreciation. They can be summarized thus:


Incidentally, these comments came from posters with male names about as much as from posters with female names. This buttresses my point that there are circles in which despising men is an essential part of good behavior. Some men have been convinced that they need to deride their own sex in order to belong just as women were convinced to do in prior generations.

Some men who commented made the same self-despising point by embracing their new role in society as roguish, doltish clowns meant for public entertainment. “College women supporting a hook-up culture of fun and sex, you say?? Where, David? We need actual names of universities!!” wrote one. “Hey, but we will always be better at changing a tire and pouring a beer . . . so there,” wrote another.

There were lots of other comments too. Some appreciated the article. More argued (usually with a political edge) that the statistics Brooks cited had more to do with broad and/or recent economic history than a difference between the sexes. But there were very few who said, as one woman did, that this article overlooks strengths that men tend to possess that women do not. Even fewer asserted that the unabashed sexism exhibited in many of the 402 comments is inherently repugnant.

Reading stuff like this makes me understandably uncomfortable. There’s nothing quite like encountering a group of people that take it as a given that you’re inferior. But it also got me thinking, what are men for? Setting aside the ethical questions about our reproductive technology, why does the world need men? What is man’s dignity when portions of the world find him despicable?

These are among the many questions that only have a firm answer to people who believe God’s revelation. Social scientific arguments may sometimes be persuasive but ultimately are in the eye of the beholder. By contrast, God gives a firm answer in the Bible as to why men are important.

“God created humankind in his own image, in the image of God he created them, male and female he created them” (Gen. 1:27). Each male and each female reflects the image of God. But male and female together reflect his image too. In marriage, a man and a woman—two—become one flesh and produce a child who is also of the same flesh as the parents. Three who are substantially distinct but are one in essence—this is the image of the Trinity. The world does not see this image without women, nor is it visible without men.

Moreover, it is not accidental that when God’s relationship to his people is illustrated in Scripture using the masculine-feminine dichotomy, God is always portrayed as masculine and his people collectively feminine. God plays the man toward humanity; humanity, male as well as female, plays the woman to God. (I’ll dig deeper into this in a future post.)

In all these ways, humanity’s grasp of who God is and what he is like would be lobotomized if there were no men (or, as I said, women). And if this is true in the fallen human race distortedly reflecting the image of God, how much more so in the glorified human race perfectly reflecting him!

Modern individuals may despise and even hate men for any number of reasons. But to the extent that our society as a whole denigrates men, seeking to marginalize them, and manhood, seeking to eliminate or pervert it, it’s for one basic reason. Our world hates men because our world hates God. Though few if any are conscious of it, this is the silent, overarching spiritual force behind the contempt of men, the very same force behind the degradation of women. Both phenomena arise from an attempt to obscure the image of God in his creation so that he might not be seen, feared, loved, and worshiped and so that we might not find the happiness that we can only find in him.
1 comment: